Gargoyles of the tangata whenua

Several days in the Far North town of Kaitaia running a writing workshop for a bunch of local teenagers. The town has rampant unemployment, and was in the national news while I was there for an outbreak of gang warfare that has killed five gang members in the last year (Black Power, Mongrel Mob, Headhunters, Nomads). Problems range from gang executions to kids selling cannabis in school on behalf of their parents. 'Smash Dog', a spokesman for the local Mongrel Mob announced they were planning a formal 'fight night' next month, a social event, to bring the gangs together to stop the killing. Go figure.

I had been invited to Kaitaia by Nancy Wiperi, a community activist charged with empowering local kids through storytelling. Location of our workshop was a freezing wharenui (below) with the most elaborate and tortured figures carved masterfully into the wooden interior. Gargoyles of the tangata whenua. 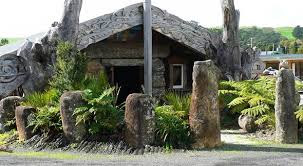 The kids ranged in age from 13 to 17 and were drawn from Kaitaia College (kiwis, plus kids from Germany, the Isle of Man, South Africa, Spain) and a small local village school. Some of the Maori kids from the village school had never met a foreigner before, and among these was the great-grandson of esteemed Maori poet Hone Tuwhare.

Kids this age have a predilection for science fiction, perhaps as an escape from the nature of their environment, but rapidly segued into events of the real world when I invited them to imagine a poetic transformation of their own tender histories. We looked at how to inflect these stories with the template of the Hero's Journey - a story-telling pattern that goes back to the dawn of man, and which occurs in bold form in Maori myths.

I was inviting them to create stories that transcended the restricted nature of their lives, and they took to it with alacrity. The enthusiasm and native energy of teenagers is always a thrill to work with ... their imaginations still pristine and undamaged by the burdens of adult life and the sterile ways of the corporate workplace.

Perhaps on my next trip to the north, I'll invite the gang members to a creative writing workshop. While not as cathartic maybe as a 'fight night', it might provide a little respite for the local hospital services.

At a writing workshop I held some time ago at Paremoremo Maximum Security Prison, I was struck by two things - the profound sadness of these men ... and also the sense of puzzlement in the inmates, many of them Maori gang members; as if they were faintly baffled by their predicament. At one level the catastrophe of their lives was a failure of creativity - an inability to imagine a future for themselves that didn't include violence.