The day I sailed with Hotu and his crew on Haunui, he had a party of school kids aboard, mainly Maori and Pacific Islanders. He spoke to them of the biology of ocean voyaging; astronomy, physics and the agriculture of the Polynesian peoples. He spoke of Captain Cook’s admiration for the masterly seamanship and vast distances Polynesians travelled in their waka as a matter of course. He pointed to the flag he was flying on the stern … the Confederated Tribes flag, and explained how in the 19th century Maori were active traders around the coasts and to Australia. The boat had become a classroom.

“I’m from the Tainui tribe, and my parents would often visit Turangawaewae where I saw the revival of the Waikato River canoes at Ngaruawahia. At the Auckland Anniversary regatta in 1970 a war canoe was used for the first time in years … I was young but it had a huge impact on me. In 1972 the Maori Queen commissioned a new war canoe, and this boosted the tradition.


﻿"By the time I was 17 I was in charge of a big waka. Then in 1975 I saw a film about the launching of the Hawaiian waka, Hokule’a at the Maori Queen’s house … from that time I was fascinated by this ocean going craft and wanted to sail on her. After studying anthropology at Auckland University I went to Hawaii and hung out with the Polynesian Voyaging Society, who were relearning ancient celestial navigation techniques. They had brought in a Micronesian master navigator called Mau Piailug to teach them the old skills. He became navigator on a voyage from Hawaii to Tahiti in 1976.

"Until 1992 the Hawaiian canoe was the only double-hulled waka in Polynesia. Then Hec Busby built Te Aurere here in NZ and from then on I was involved in her ocean voyages … to Rarotonga and back, and there was a lot of knowledge exchange with Hawaiian crew …

"The German philanthropist Dieter Paulmann became interested in the impact of man on the world’s oceans, and saw a waka fleet in the Pacific as a way of publicising this. We agreed to build waka to teach sailing and navigation and to record the degradation of the oceans … First Peoples from every land were saying we had become deaf to the message of nature.

"Haunui was built in 2009, the second in the fleet of seven, which were all built at Salthouse Boats in Greenhithe. She’s made of modern materials, but based on drawings made by 18th century European explorers … meticulous naval drawings of Polynesian canoes. Each of Haunui’s twin hulls has its own name … I named the port hull after one of my aunties and the other hull after my Dad. He was pretty sceptical about my whole interest in waka revival. 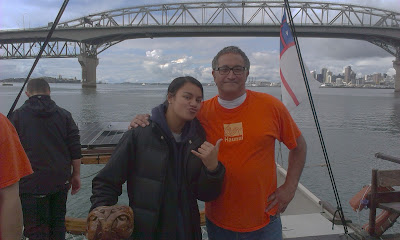 "As different island groups acquired their waka they came to Aotearoa to learn to sail them home, and I helped teach the crews the skills they needed. In 2010 we shipped Haunui to Samoa and then sailed back on her maiden voyage … the first such voyage in 400 years. We had to learn everything along the way; points of sai;; how to use the steering paddles.

"We’re re-introducing the Maori and Polynesian kids on board to the greatness of their ancestors. Many of them aren’t aware of how astronomy, biology and sailing are part of their heritage.