My grandmother ... artiste with a shotgun

John remembers his mother of all grandmothers

Elsie was a small, bird-like woman, a former London school-teacher, whose house in Saunders Avenue, Morrinsville, was marked out with a large warning cross on the maps of the Waikato chapter of the Jehovah's Witness Church. 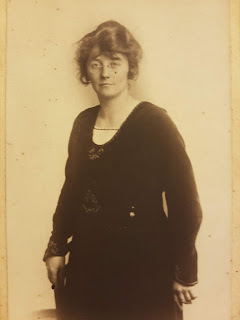 Something in her past had left her with a deep animosity to fundamentalist Christians, and when they came to her door, she would trap them on the porch, and deliver to them a harangue of such ferocity that they were often left white-faced and trembling, before she ushered them from the property.

In those years, before the Mormon Church sent its crisp-white-shirted emissaries door to door in small Waikato towns, the Jehovah's Witnesses enjoyed a prolonged ascendancy ... hawking copies of their magazine The Watch Tower, which was illustrated by terrifying cartoons featuring lurid threats of eternal damnation to the unbeliever.

(Strange but true fact: Jacinda Adern comes from a family of Morrinsville Mormons. History is silent on whether she ever encountered my grandmother.)

Elsie Beswetherick  had endured many things, including the death of two of her children in infancy, the death of her mother at the age of ten, and Zeppelin airship raids over London in WW I. She was known to have exterminated the rat population on her property in England with a shotgun, a weapon that was taller than she was, when she posed beside it with a sorry gaggle of slaughtered rodents.

Her son, Roger: "A single-barreled full choke 12-bore shotgun ... stood by the window in their bedroom, close to the hand of anyone overlooking the chicken run ...  The hens and their food attracted the occasional rat ...  One day I was mooching about in the chicken run, obscured from the house by apple trees ... there was the roar of the gun, a swish of shot and a stinging sensation in my forehead and arm.  A few flattened ricochets had struck me with just enough force to lodge in my skin.  What are you doing? Says I.  I’ve just shot a rat, shouts Mum! On another occasion, a plague of jackdaws was infesting the run at feeding time, accounting for a proportion of the chicken’s grain.  Mum caught the jackdaws clustered in the Victoria apple-tree ... The old gun roared, and nine jackdaws flopped to the ground."

She was a music teacher, had perfect pitch, and I still have her elegant Bannerman piano in my bedroom. A shot-gun-toting music-teacher seemed to me to be an ideal model for a grandmother - a perfect balance of yin and yang, of the masculine and feminine principles. Although ferocious in her attacks on rodents, jackdaws and Jehovah's Witnesses, to me, her oldest grandson, she was always gentle, unassuming and fun.

She had Cornish ancestry, and once a year, she would import fine red threads of saffron from Spain, and make a ceremonial batch of saffron buns; a Cornish traditional dish ... pale yellow, doughy and delicious.
When my grand-father, a man wrecked by WW I, an arduous life as a blacksmith, and grief for the loss of his home country, began crying eight hours a day, seven days a week, and was incarcerated in Tokanui Mental Hospital for a savage round of electric shock treatment, she maintained an imperturbable calm, as if he was on a prolonged business trip, and rarely if ever mentioned his absence.

When he returned, all Stanley could manage was to do was sit in the porch and knit scarfs, an incongruous activity for a massive ex-blacksmith, and in order to cheer him up, I would tell him my twelve-year-old's jokes, which sparked uncontrollable laughter, laughter that wracked his body until once again he broke into violent sobs, the tears falling onto his half-completed knitting.

Elsie, London school teacher to the core, wasn't keen on these open displays of emotion, and would chide him on misbehaving in front of his grand-children. I remember feeling a mixture of sorrow, pity, and a certain fascination at this spectacular disintegration of masculinity.

By coincidence, my own father, Elsie's son-in-law, was also a music teacher, and the whole question of what constituted real masculinity became a pressing question in our home in Morrinsville, stamping ground of the renowned All Black Don 'The Boot' Clark, and his famous brothers.

I compensated for this lack of masculine credibility in our men-folk by becoming a ferocious rugby enthusiast, playing at No 13 and was known for my kamikaze attitude to tackling. Sometimes, Elsie, a firm proponent of the principle that men should be men, would come to see me play, a tiny figure standing on the side-line and cheering me on - something my own father never did, lost as he was in his Bach fugues and Beethovian caprices.

When Stanley finally died, and Elsie was incarcerated in a rest home in Hamilton with alleged Altzheimer's disease, I remained convinced during my teenage years, that her dementia was an act, that she had decided 'not to be a nuisance' and had gone quietly to the zombie domain of the aged and infirm rather than be a burden on the family, and that behind her octogenarian demeanor her school-teacher's mind was just as sharp as ever.

I shared this thought with my mother, Elsie's daughter, who looked first horrified, then strangely impressed, as though perhaps I had hit upon something. There was an element of self-abnegation among the women-folk in my family, as though conscious that their intelligence, self-awareness and complexity was not too highly valued in a woman in that era, and that it might just be smarter to play the game and go quietly into that good night.