Waiting for the Barbarians ...

In which John rashly pursues some thugs in a half-blind state.

When a group of men tried to kick down my front door in the small hours of Friday, 13th December in the seaside suburb of Bayswater, Auckland, it brought on a strong whiff of nostalgia for my former life on the other side of the world.

A colossal hammering woke me at midnight, and levitated me out of my bed, convinced I was having a nightmare. Then it came again. I ran to the door. 'What's up?' I called. No response. The noise intensified. 'What the hell is going on?' Peering through the stained glass window of my front door, I could see several moving shadows. This didn't seem like a friendly visit.

I rang 111, and my call was answered by an operator reassuringly called Wyatt.

In the comic books of my youth, Wyatt Earp was the sheriff of bad-ass Western towns terrorized by criminals. Wyatt wasted no time in racing to the scene, and dispatching the low-life with his Colt 45.

This Wyatt didn't have such good news for me.

'All our cars are tied up on other incidents right now. But if things escalate let me know.'

'If things escalate, it might be a bit late,' I pointed out.

The hammering on the door came again. 'Did you hear that?' I asked.

'That's how I would describe it.'

The police arrived two and a half hours later.

Twenty minutes after I got off the phone, one of the men ran at my door and gave it another huge whack. Through the stained glass window, I saw him run off.

The fact that he had turned his back triggered some primal instinct. I grabbed my squash racket, wrenched open the front door and, clad only in my boxer shorts, sprinted after the intruders.

I heard the sound of feet running rapidly down the street, and a flash of a yellow hoodie, barely visible, given I was half-blind without my contact lenses in. I raced after the men, waving the racket in an intimidating manner. After a few hundred metres of the chase, the intruders disappeared into the darkness.

I got into my car and drove around the neighbourhood, then staked out my house. After an hour, I went back to bed.

Half an hour later, the crashing on the door came again. They were nothing if not persistent, I thought. This time, I ignored them, which seemed to be what I should have done the first time. I had looked back at the end of my chase to see my front door wide open, light blazing into the night. A perfect invitation.

For the next hour or so I lay in bed, gazing at the ceiling and casting my mind back to my first job after leaving university in Wellington, which was as an estate manager in London's red-light district, Kings Cross.

My responsibility was to try to manage the heroin dealers and pimps on my estate - 'Kings Cross Estate of Shame' as Hillview was known in London's Evening Standard. Perhaps the most notorious estate in Camden, if not London. The estate acquired its name from the fact that it was located next to a vast ash-heap that had stood by the station in Victorian times. 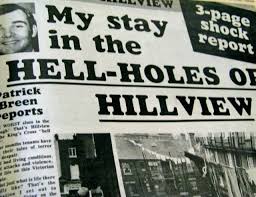 I had a large metal box bolted to the back of the letterbox in my front door, as a precaution against a visit I anticipated from Sparky, aka Mr William Patterson. Sparky lived in the next stairwell and had acquired his name from his firebomb attacks on the homes of his competitors in Kings Cross.

He had flat eyes, a Glaswegian accent, and a pudding basin haircut.

His name was engraved on a large metal plaque that he had fixed to his front door. A stylish attempt to confer respectability on Kings Cross's most notorious and violent pimp.

I had a rope ladder under my bed, tied to the bedposts, so that I could scale down the side of my apartment block in case the metal cabinet failed to contain the anticipated inferno.

A dozen dealers and pimps, lead by Sparky, ran a network of prostitution and drug commerce on the estate, and my strategy was to watch the flat in question over a period of time, and then when the criminal was out, swiftly bring in a gang of workmen, and bolt a thick steel door to cover the existing one, and add steel shutters to the windows.

The dealer would return, find his squatted flat inaccessible to him, and go off to find fresh pastures. That was the theory at least. I deliberately spaced these evictions a few months apart, to lure the criminals into a false sense of security. I was keen to avoid them banding together to plan reprisals. 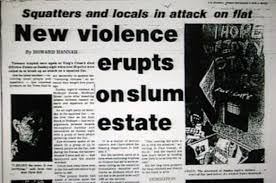 Sparky's right-hand man, Big Jo, was a cashiered member of the SAS who had served during The Troubles in Northern Island, and got about the estate in summer clad only in a pair of lurid green running shorts, with a machete tucked into his waistband.

The interior of Big Jo's flat was painted bright pink, to simulate, I imagine, brothel-like ambience. Unlike Sparky, who was ominously uncommunicative, Big Jo was a garrulous, friendly man, and I sometimes got chatting to him in the courtyards. He was quite open about his business activities, and I never knew whether he knew that I was plotting his demise. He once confided in me: 'I'm like a vampire, I only go out at night.'

So it was at night that we made our move.

It took five years and a couple of trips to hospital before we got rid of these men. During that time I became acquainted with violence. Very acquainted. Anyone who enjoys violence on screen hasn't seen it up close. Up close it is messy and unpredictable. And profoundly corrupting of the human spirit.

Now, here in Auckland, Friday 13 December, I lay in bed unsleeping, alert to any new sound, smartphone and squash racket beside me, remembering those years with absolute clarity. I recalled that the most extreme violence could happen quite suddenly and was often over quite fast. You had to pay attention.

At 2.30am the police finally arrived.

'Do you have any enemies?' enquired the teenage bobbies.

I laughed in a hollow kind of way. 'How well do you know the literary scene?' I asked.

They looked a bit perplexed. 'Also quite a few in Kings Cross, London,' I went on. 'But I don't think they'd come this far.'

We discussed an ex-flatmate who I had evicted because of his drinking. They checked him on the police national computer and noted his drink-driving conviction. 'Hmm,' I said. 'I don't think its him. There was more than one.'

In fact, as I found out the next day from my neighbour Chris, who has witnessed the whole incident from his second story house, albeit also without his contact lenses in, there were four of them. One quite large, who had operated as look-out. My counter-charge with squash racket suddenly seemed about as smart as the Charge of the Light Brigade.

The large one had operated as a look-out, who clapped his hands as a signal for the gang to scarper.

I had once been the editor of a magazine with a lot of readers, and during that time had had one or two adversaries. I recalled, for instance, a furious letter from the head of the tow-drivers' association after I had run a series of satirical cartoons at the expense of the tow drivers' fraternity.

Towies are large men, who have been known to bear grudges.

I recalled, also, the outraged owner of a car and plane museum, which had accidentally filled a 1947 Studebaker with high octane aviation fuel for a road trip across the Southern Alps. As a result the car burst into flames at the pinnacle of the range, nearly incinerating me.

When I wrote about this, the museum owner angrily denied they had done any such thing, and threatened dire reprisals if the story was not withdrawn.

Even the most sweet-natured person can acquire a few enemies over a life-time. And regrettably, I couldn't recall anyone ever describing me as sweet-natured.

The next day a key piece of information came from another neighbour, Anthony a hundred metres away on Balfour Street. He had heard a similar hammering on his downstairs door the same evening. This suggested I hadn't been personally targeted, but rather that it was a random attack.

It was a relief to know that I could now sleep easily - easily, that is, until my next book review was published.