We are all Milanese

A blind man stands outside a cathedral in the deserted central square of a great city and sings.

And the whole world weeps.

Around him, in a city once vital and proud, men and women are dying.

They are dying alone, in the middle of the night with no-one to touch their hands, or to press a last rosary between their fingers. They are dying alone at dawn as their husbands and wives pray in solitude, a few kilometres away in shuttered houses and apartments.

They are dying at midday, as the April sun reflects off the stainless steel and glass of the wards in Milano's great hospitals.

Their spouses pray in the hope that their beloved of fifty years will be spared, and that a reassuring voice on the phone will quell their fears.

Throughout this city, white and orange ambulances thread their way along narrow streets and alleyways, bringing their cargo of the mortally ill to the doors of the Ospedale Luigi Sacco, the Ospedale Niguarda Ca' Granda, the Ospedale Pio Albergo Trivulzio, the Ospedale San Raffaele. 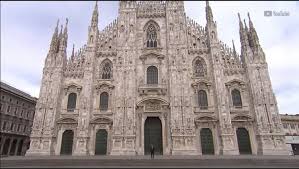 Alone, in the square, the duomo a towering, ornate backdrop, testament to the vision and brilliance of man's artistry, the solitude of this blind man reminds us of our own fragility and impotence before nature, of our own mortality. Of our brief passage on this earth, and of the fact that death can come to any one of us at any moment.

The world watches, transfixed, at the unfolding tableau.

Because we know that this is only the beginning; that the anguish of Milano is a glimpse of the future; of the suffering of many great world cities to come. That in the months ahead, we will all be Milanese, united in a brotherhood and sisterhood of grief.

And so this scene is as poignant as anything seen on earth since the 8th May 1945 - Victory Day at the end of World War II - because here we get our first glimpse of the unimaginable number of deaths to come.

The population of this great city and the towns around it are dying in such numbers because now and then nature, which we have subjugated to our will on a grand and ruthless scale, flexes and stirs, and reminds us that we are mortal, that we are here as her guests, and that our dominion over the earth is a tenuous, arrogant, and temporary thing.

When the earth slowed down, two months ago, and held its breath, the traffic stopped, and we started again to hear birdsong. We noticed the sky, suddenly blue, and its miraculous heart-stopping patterns. We started to listen to a new rhythm, and it was the rhythm of nature, that we have suppressed at our great cost. As men and women died in their tens of thousands all over the globe, at dawn, we saw light flooding the horizon, and that light was an invitation to a new beginning.

Perhaps the earth was waiting to tell us something. Perhaps at the heart of this catastrophe is a small still voice from the natural world that speaks to us if we wish to hear. It says: Your attack on nature; your relentless extinction of other species; your encroachment on the natural world of animals and their habitats; your expansion into vast cities, has brought you to this.

As we witness the steady spread of the virus into the cities of the developing world; in Africa, India, and Latin America, into nations which have one ventilator for a million citizens, we are reminded once again that our fate is the fate of all humanity; and that in the century to come, our destiny will be indivisible from that of everyone on the planet.

And so every decision we take from now on; whether in our own lives, in the lives of our communities, or those of our political elites - will impact someone, somewhere, on the other side of the earth.

In 1624, as he was recovering from typhus fever, the English metaphysical poet John Donne wrote:

No Man is an Island:

No man is an island entire of itself; every man
is a piece of the continent, a part of the main;
if a clod be washed away by the sea, Europe
is the less, as well as if a promontory were, as
well as any manner of thy friends or of thine
own were; any man's death diminishes me,
because I am involved in mankind.
And therefore never send to know for whom
the bell tolls; it tolls for thee.