I first met Jim fifteen years ago when he was a trawler skipper, and ran into him regularly at the Tepid Baths spa pool, bleary-eyed and warming up after several days at sea. Now he's skipper on the tug 'Koraki' which is moored at Bledisloe Wharf. I clambered down a five metre steel ladder onto the heaving deck of the tug on a rainy winter day in a pair of black brogues. I hadn't quite prepared for the meeting. 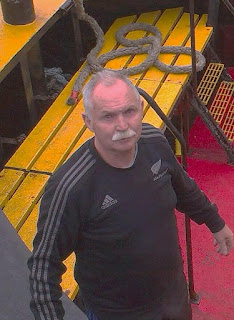 “When the container shop 'Rina' wrecked on a reef off Mount Maunganui we were sent down to mop up the oil spill. We also tried to get as many containers off the ship as we could before they were washed into the sea.

"Right now we're towing a big barge up to Whangarei twice a week to pick up 2000 tonnes of cement for the Auckland building industry. Tomorrow I’ll be up 3.30am for a 5am departure from Auckland. It's a twelve hour sail up the coast.

"I first went to sea at the age of 14 as a deck hand. I liked the life ... seeing whales and dolphins in summer between Little Barrier and Cape Rodney … I got my skipper's ticket when I was 19 and my first job was running a Danish Seiner. My Dad had been a Danish Seiner fisherman working out of Auckland before me. And now my son Nick is a First Mate on a tug in Darwin running supplies up to Aboriginal communities in the far north of Queensland.
﻿
"On ‘Koraki’ we have a crew of five, First Mate, Engineer and two deck hands. If the wind is from the north-east it can be pretty uncomfortable … and above 25-30 knots we don’t sail.

"Recently on the Whangarei cement run we had a fire in the port engine at 2am just off Pakiri Beach, and had to abandon ship. Toxic fumes were coming off the engine and it was so out of control there was a risk of it exploding. We were in a 25 knot sou'wester with rain, so it wasn’t too comfortable in the life raft. We were picked up by the Coast Guard from Whangarei and the good old NZ Navy extinguished the flames … so we were back on board by 10am the next morning.

"Sometimes when we're out to sea, we get worse weather than is predicted … 40-50 knot wind behind you with a 2,000 tonne barge behind can be a trial. In the stronger weather we let out the tow line further to absorb the strain.