My dance partner Rea Jarai and I performed at a fund-raiser for the earthquake victims in Nepal recently. We chose two classic tango tracks ... 'Que Falta Que Me Haces' and 'Desde el Alma', plus a modern piece by the Gotan Project ... A hundred folks at the Grey Lynn Community Centre gave us a lovely reception ...

Tango was born in the waterfront slums of Buenos Aires at the turn of the 19th century ... and is a melancholic dance full of yearning, tales of lost love, and nostalgia for the home-land. It was developed by southern European settlers of Argentina and first danced by pairs of men, such was the shortage of women in the city at the time. 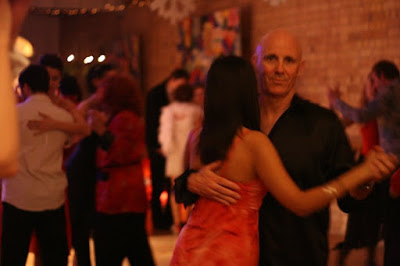 The audience was also treated to a Nepalese theatre troupe, modern folk singer Kiri, a Latin jazz combo, a whacky fashion show, and some wild clowns led by Bhadrakari, one of the leaders of the Auckland Buddhist Centre - who had organised the event. Scotty, an Aussie didgeridoo player was broken hearted on the night because his two metre wooden instrument split from one end to the next shortly before the event. Auckland weather conditions no doubt.

Half the $4000 raised went to the Auckland Buddhist Centre, who organised the evening, and who provided a ravishing vegetarian banquet and light-hearted and upbeat compering.
Posted by John Cranna - Director, The Creative Hub Writing Centre, Auckland at 17:37