An attack at Kaiser Wilhelm's church

As I was writing of my visit to the Kaiser Wilhelm Church in Berlin, a young Tunisian called Anis Amri drove a black Scania semi-trailer into a Xmas shopping crowd around the church, killing twelve people and injuring 56. He couldn't have chosen a more poignant location to create this carnage, because the church is a monument to the tens of thousands of Berliners killed by Allied bombing in WWII. The building has been left in its distressed state as a reminder of the insanity of war, and beside it has been built one of the most beautiful structures I have ever seen.

A remarkable apparition has sprung up in the shadow of the ruin; a new church whose 50,000 stained glass windows, homage to Chartres Cathedral in France, blaze in a vast display of incandescent blue. Sitting in the church, I reflected on how an artistic masterpiece on this scale can create a monument to the dead that remains with you for months afterwards. 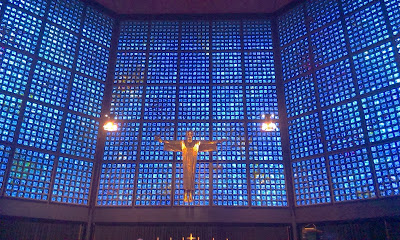 The next week I listened to a performance of a J.S. Bach cantata in the new church, with full choir, the centre-piece of a service conducted in German by a bearded clergyman with a sonorous voice and vigorous gestures. The choir were located on a mezzanine floor, so their voices flew overhead like a divine wind.

The fire-bombing of civilian areas of German cities would now be deemed a war crime (think Aleppo, but on a vast scale) - but was thought necessary in 1945 to 'break the spirit of the German people'. If anything, it firmed the resolve of the populace. Kurt Vonnegut's novel 'Slaughterhouse Five' is a black comedic account of his survival of the fire-bombing of the medieval city of Dresden, to the east of Berlin. As an American Prisoner of War, his task was to emerge from the basement of a slaughterhouse after the holocaust, and sweep up the charcoaled remains of some of the 20,000 German civilians incinerated in one night, largely women and children.

It's hard to know whether Anis Amri, the truck driver shot dead two days ago by Italian police after he fled to Milan, had any understanding of the act of desecration he was about to commit. The killing of a French cleric in his church by a jihadi this year suggests the target may have been deliberate. Amri was a petty criminal, involved in the drugs world before becoming radicalised in Italian gaols. He chose this most sacred of spots in Berlin to renew the cycle of death that probably won't end until the unemployed and disaffected young men of the Arabic diaspora in Europe are drawn out of rage-filled isolation into the cultural mainstream.