The tango club, the Haus der Sinne, was somewhere in north Berlin. Part of my mission over the city was to dance my way through as many tango clubs as I could, in a city second only to Buenos Aries in its obsession with this most passionate of dances.

The sheer ferment of tango culture in Berlin is astonishing. I found tango clubs tucked away beneath the rough brick arches of railway embankments; I stumbled across outdoor milongas swirling along the banks of the steely River Spree on a hot afternoon ... and bursting out of stylish cafes in the 19th century Kulturbrauerei in Pankow. 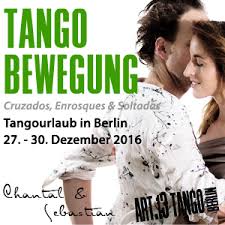 Now it was 10pm, I had walked for hours in search of the Haus of Sin, and found my way blocked by a long, sinister boulevard, devoid of pedestrians or lights. I had the odd feeling that I was entering a parallel universe. I hurried up the deserted road for twenty minutes, pleased to escape un-mugged into the warren of backstreets that led to the Haus. Next day, I discovered I had crossed the famous Mauepark, a former killing zone beneath the Berlin Wall ... now a monument to the divided city. The remnants of the Wall had been invisible in the darkness.

At the door to the Haus der Sinne, a statuesque blond woman, with bright red lipstick, clad in black leather and holding a tassled cane waved me inside. I perched on a bar stool with an orange juice, watching the tangueros move about the floor in their fixed, intense coupledom. They were submerged in the gloom, like strange four-legged animals in a primordial sea. On a pillar was a picture of a bear-like creature, and next to it, a wan-looking girl with her legs splayed open. But there didn't seem to be a lot of sinning going on. Perhaps my translation was wrong? On checking the German, I found 'Sinne' means something else altogether.

Tango couples are hermetically sealed; locked into their twelve minutes of love with a fixity that excludes the world ... and I watched as they danced tanda after tanda. The pairs weren't breaking ... it seemed that the Haus der Sinne attracted couples, rather than the free spirits I was in search of. Very different from Cafe Franz at the Kulturbrauerei where I had animated chats with foreign tangueros and begun dancing immediately. This club was patronised by native Berliners. After an hour or so, unable to attract another dancer with the traditional cabaseo, I gave up and ambled off into the night. The blond woman at the door grinned and gave me a playful whip on the butt as I departed.

Quite why Berliners have taken so avidly to tango is a hard to explain ... a tortured history; their historic interest in intense, theatrical art-forms ('Cabaret'), and Berliners' very un-German obsession with sensuality. Christopher Isherwood's 'Goodbye to Berlin' and its depiction of licentious Berlin culture between the wars, is a classic portrait of a doomed civilization, and the spirit of the Weimar Republic still lives in Berlin. Tango allows raw and unbridled expression of passion between total strangers. And yet, paradoxically, it is also a complex and mesmerizing art form, in which the human spirit soars free within the architecture of the dance.
Posted by John Cranna - Director, The Creative Hub Writing Centre, Auckland at 00:38