There are not many scuba instructors who tie themselves to the sea bed on an incoming tide, but then Wolfgang Borner was an unusual man.

Today I visited his grave, an unadorned block of concrete, without inscription, in a graveyard full of the elaborate, flower-covered sand-mounds of local Tongans. 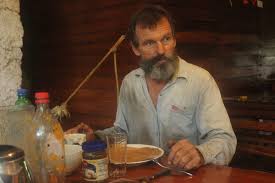 When I first met him, he had just begun construction of a row of chalets on a coral ridge above the ocean on the island of 'Eua. He had a sawmill from Sears and Roebuck on his back lawn, and fashioned tens of thousands of planks from off-cuts of the island's logging industry.

He had persuaded the loggers to give him the wood for free. Each of the chalets featured minutely worked wooden shutters, and hand-carved doors and lintels. Between 2009 and 2015 this stylish row of red cedar huts extended further along the escarpment overlooking the harbour. He also built a large dining room, and a vast shed to cover his sawmill. When he finished this project, he immediately began construction of a 21 foot catamaran in which he would 'sail into the sunset'. 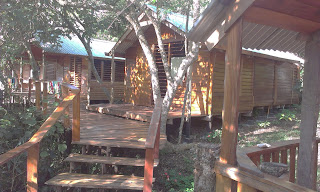 I returned every year for four years to 'Eua, as the row of fale crept along the ridge above Ohonua Harbour, sometimes camping on the floor of a half-completed hut, while I learned scuba diving from Wolfgang. He was an impatient, exacting teacher, who reprimanded me for my tendency to float to the surface. Only by girthing me in many pounds of lead, could he get me to stay on the bottom.

He kept bees on the escarpment next to the huts, and presented comb honey to his guests. Almost as good was his papaya and passion-fruit jam; his oven-roasted arabica coffee; his cinnamon and chocolate pancakes, and the elaborate pizzas he made in his home-cast pizza oven. Friday night was pizza night, and locals, including a bevy of Mormon missionaries, would converge from around the island to feast on Wolfgang's fare.

Wolfgang had been a wealthy man in the former East Germany under Soviet rule, where he ran a commercial sawmill, and owned a multi-story house. Visiting an aunt in the West, he had been tempted to escape, but drank a litre of vodka and steeled himself to return to his wife and daughter.


When the Wall came down, Wolfgang fled Berlin for Honduras to run a dive centre, where his problems really begun. He ran out of money, his dive boat was damaged, and he began to have hallucinatory dreams. His wife and daughter, soured by this precarious life and his pungent, prophetic visions, abandoned him and returned to Germany. His place in Honduras was infected with demons he told me, who appeared in the guise of a wild red dog, and it was only through Jesus that he was able to keep them at bay. 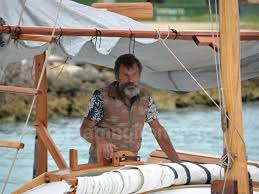 As well as being a scuba instructor, Wolf was also an adventurous sailor, a gifted and creative mechanic, and a relentless pursuer of the hump-backed whales that came to 'Eua each winter to breed and give birth. One year, I brought him a suitcase stuffed with fins and snorkels. Another year I gifted him a computer, which he cast in the ocean when he discovered his young Tongan assistant watching pornography.

Around a fireplace made out of rough blocks of coral, Wolfgang would open a bottle of whiskey, and in passionate tones, explain how the promise of eternal life brought him profound joy and exaltation. Thus was ordinary life made bearable. Often, in the midst of these speeches, his guests would get up and leave. It was when the monologues began over breakfast, that I realised things were moving to crisis point.

On my final visit in winter 2015, he sported a biblical grey beard, and his hand shook when he poured my coffee in the morning. He was putting the finishing touches to 'Kleines Boot', the ornate catamaran that was his final opus.

The Tonga Times reported the Wolfgang had indeed sailed the 41 kilometre stretch of ocean to the main island of Tongatapu. He told reporters that the boat was too small for ocean transport, and he planned a monster craft for the hundreds of kilometres to the island group of Vava'u. Two months later, he was dead.

His employee at the Ovava Tree Lodge, Tani, told me that Wolfgang had disappeared at Xmas 2015, and three days later, fishing for a New Year banquet, he had found the German on the seabed, in flippers, snorkel and mask. He had tied his feet to a large rock.

It was a typically flamboyant gesture from a man who lived by extremes; a Berliner who rarely compromised in the execution of his plans ... and a man who brought to the tiny island of 'Eua, a memorable cargo of skill, passion and eccentricity.