Perhaps it was the resonance of my own parents' romance (they met in the Indian ocean on a ship leaving war-torn Europe); perhaps it was reminder of the price of heroism under fascist occupation; perhaps it was the ability of literature to keep alive empathy for the outsider in times of hatred and intolerance - but I loved the Guernsey Literary and Potato Peel Pie Society, a new film by director Mike Newell.

It's 1946 and Times of London columnist Juliet is reeling from the death of her parents in the Blitz. She's engaged to a wealthy American officer. She travels to the Channel Island of Guernsey to cover an eccentric literary society who have resisted the German occupation, but whose antics are shrouded in mystery ...

There, she befriends a rugged Guernsey pig farmer, Dawsey, who is fostering a girl whose mother was taken to the Nazi concentration camps. Her crime? Helping the slave labourers of the German Todt Organisation.

Dawsey is a haunted, loving step-father, and the backbone of the literary society. He is a complex man and has befriended a compassionate Wehrmacht doctor during the occupation. This doctor is the father of his step-child, so there is a Gordian knot of loyalties at the heart of the film, that defies cheap stereotyping. 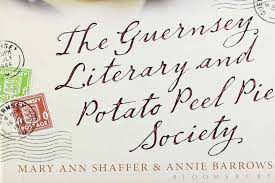 The batty little literary group recite passages from Charles Lamb's book, Tales from Shakespeare and other literary works during the long nights of the occupation, and fashion pies from potato peel and other modest ingredients.

The strength of the movie lies not in the fairly predictable love story between Dawsey and Juliet, but in its clear-eyed look at the collaboration and betrayal that lay at the heart of many countries occupied by the Nazis in WW II. (Think the trial of Klaus Barbie - the Butcher of Lyon, in 1987 - and its impact on France.)

Love stories set against a backdrop of war (Hemingway's A Farewell to Arms; Michael Curtiz's movie Casablanca) have their own special pungency; the stakes are so much higher; the loyalties profoundly torn - the betrayals that much more hideous. There are aspects of the movie that are undoubtedly twee ... a strong whiff of sentimentality at times (Guardian and Observer reviewers note its affection for Northanger Abbey-style costume drama conventions) but this doesn't detract from the moving portrayal of an island torn apart by the arrival of brutal interlopers.

I came out of the cinema thinking how WW II was a catastrophic blow to the shared integrity of European culture - the notion that we Europeans are united in a common vocabulary of values, music, literature - and moral sensibility.

The savagery and inhumanity that blossomed so quickly on the Continent in my parents' lifetime, is a reminder that the crust of European culture and values is only skin deep, and the forces of racism and militarism can erupt at any time.