I've arrived on 'Eua, a small island in the Tongan chain, at the same time as the humpbacks from Antarctica. The whales travel up the plunging Tongan trench from the Southern Ocean, and this week turned up in the waters off 'Eua. The tell-tale geyser of their spout can be seen for up to half a kilometre away by the sharp-eyed. The whales give birth and suckle their young during the winter months in these waters, which are shallow enough to protect the newborns from great white shark attack from below. 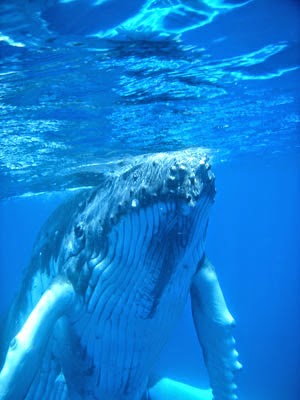 I came to this island twice last year, and have got to like its lazy ways, the absence of supermarkets, restaurants, garages ... in fact the complete dearth of any of the essentials of western life. I can even like the opulent churches, with their world-class choirs singing in razor-sharp harmony.

Today I walked to the northern village of Houma, gateway to lush tropical forest and great sea caves which form natural cathedrals looking out west to Tongatapu. The island, 50 million years old, is being slowly pushed up by the collision of great plates 40 kilometers to the east along the Tongan Trench.

The road to Houma is long and straight, and immaculately paved, unlike every other road on the island. Half way to the village I came across George, a heavily tattooed man in his thirties, parked in his expensive looking black tricycle by his taro patch.

His wife was tending the soil nearby. Both George's feet were clad in bulky white socks. He was being pushed along by his tiny sister in law, Luciana, whose dress was dirty, and whose smile was brilliant and shy. George told me he was due to visit Auckland for a disability reunion. Most of his family live in the suburb of Mangere.
Posted by John Cranna - Director, The Creative Hub Writing Centre, Auckland at 02:21