This evening I talked to Dr Feleti Sevele, Tonga's first elected Prime Minister, a troubled looking man, who didn't seem too comfortable speaking with me, and says foreign journalists often misrepresent Tonga. He came to power a few months after the pro-democracy riots of 2006, which razed much of the CBD of Tonga's capital to the ground and left a number of rioters dead. I met him at a cocktail party at the NZ High Commission to encourage links between NZ business and Tonga.

Sevele told me the royal family of Tonga had been at the forefront of educational reform in Tonga, and that the rioters had set back the move toward a more progressive system. He was angry at the slurs cast on the aristocracy.

Now an aristocrat himself, Lord Sevele, he has every reason to look troubled ... Tonga is still a semi-feudal monarchy, where the beefy soldiers patrolling the grounds of the King's opulent palace refuse to allow you to take photos of the palace through its gates (I tried unsuccessfully today). 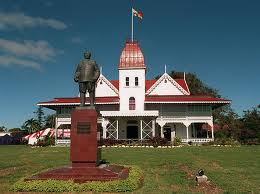 The democracy movement continues to inch forward while the kings cling to power, and robustly defend an out-dated power structure. In his book, 'Swimming with Sharks', journalist Michael Field lists the eccentric schemes and corruption the Tongan royal family has been involved in. A recent king appointed an official court jester, a Californian who disappeared with hundreds of millions from the State coffers.

This same king was involved in a scheme to turn sea-water in diesel, thereby solving Tonga's fuel supply problems in a single stroke. The businessman promoting the scheme, a confidante of the king, was also trying to secure Tonga as a dumping ground for nuclear waste.

Meanwhile, many of the king's subjects live in poverty; power cuts throughout the islands are a frequent occurrence; and the infrastructure generally totters. Tongans have become massively dependent on remittances from their nationals living abroad and on foreign aid from NZ, Australia, Japan and China. This aid dependency culture further impairs the healthy development of the economy. Of the 26 seats in Parliament, 17 are reserved for elected candidates, the remainder are held by nobles.

Small Pacific nations have become mini-battlegrounds for big power rivalries. New Zealand political leaders say, 'Well, if we don't proffer aid, the Chinese or Arabs will.' This Realpolitik undermines the long-term growth of these struggling young nations and drives the people into dependency on their advanced nation neighbours.

None of this seems to supress the natural esprit of the Tongan people, or their ribald and mischievous sense of humour. It's this spirit and warmth that makes the islands such a joy to visit ... and it is this very tolerance and good humour that seems to prevented - thus far - the overthrow of their monarchy.
Posted by John Cranna - Director, The Creative Hub Writing Centre, Auckland at 04:48